The program semi-automatically analyses all images in a user-selected folder. After starting the program by typing "processAllInDirForRConf" at the command prompt the following dialog box is displayed:

Type of analysis: interactive or automatic
Default method of segmentation: manual, intermeans, Otsu or maxentropy
Boolean operation: "or" or "and". This selection determines whether a Boolean "or" or "and" operation is performed for the masks calculated for the two images. A mask includes all the pixel above the threshold.
Size of units to reshuffle: the width of units in pixel which are reshuffled in Costes randomization
Number of scramblings: how many times Costes randomization is performed
Confidence interval: the confidence limits calculated for the correlation coefficient assuming the absence of correlation after Costes randomization
Sigma of Gaussian: the SD of the Gaussian filter used for smoothing the images
Image type:

After pressing "OK" the user will have to select the images to be analyzed. 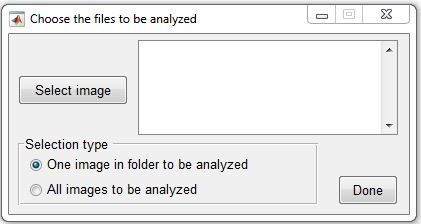 The user either selects one single image in the folder and all the other files in the folder will be analyzed, or every image to be evaluated must be selected. 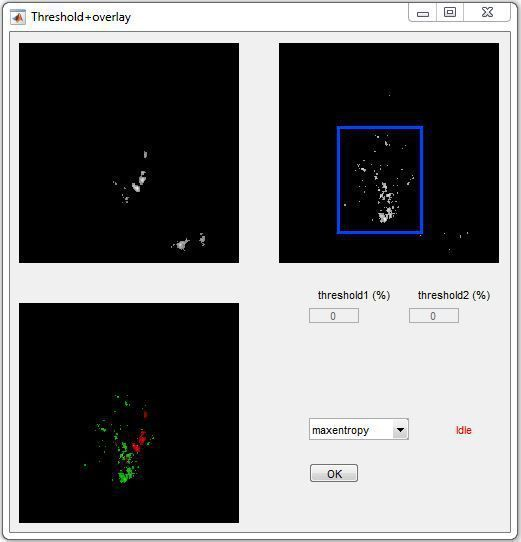 The image pairs are segmented individually according to the algorithm specified in the first GUI ("Default method of segmentation"). If the program runs interactively (i.e. type of analysis is interactive), the window on the left is shown after each image pair. The user can change the segmentation method and it is also possible to draw a region of interest (ROI) on the image by clicking and dragging the mouse over the image. If a ROI is drawn, the segmentation and the colocalization analysis are only performed within the ROI.

After pressing OK in the window above, the colocalization analysis is performed. A message is displayed in the Matlab command window and a TXT file is saved into the image folder. An exemplary text file is shown below. 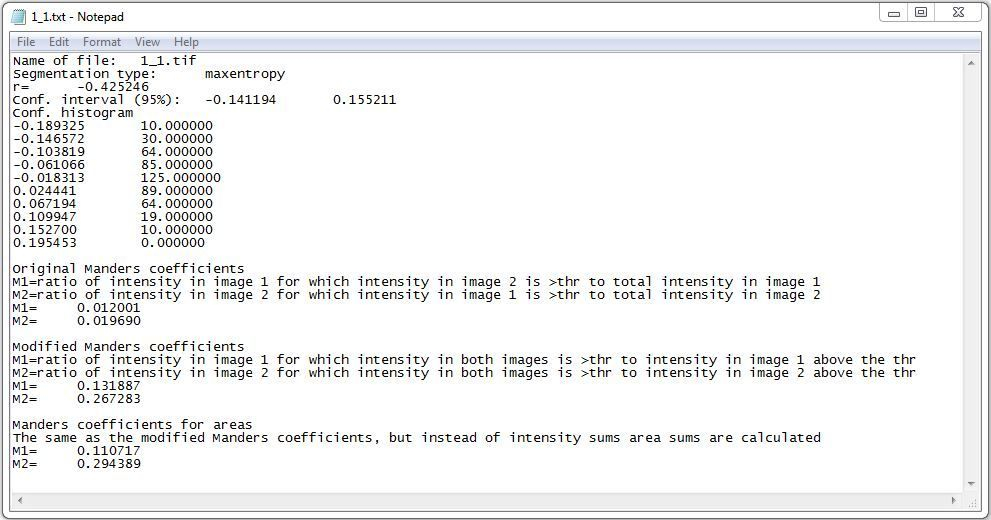 Syntax: type processAllInDirForRConf at the Matlab command prompt. Optionally, an output argument can be provided which will contain a Matlab structure whose field names describe variables stored in them.
Requirement: The program requires DipImage, freely available for download at the following URL: http://www.diplib.org
Updating: The program checks for updates every time it is run. If an update is available, the user will be asked to press the "Update" button.
Download: processAllInDirForRConf.p